END_OF_DOCUMENT_TOKEN_TO_BE_REPLACED

This won’t post until the end of 2020-ish but wow, it’s April in MA right now and this was such an eerie watch amidst our current epidemic.

There’s some fantastic performances by Paltrow, Law, Fishburne and quite a few others. However, it’s the research and writing of this film, the frightening scientific accuracy, that makes it so effective.

I love the way it’s shot and edited. The cleanness of these aggressively framed shots ironically made the film look so dirty. I found myself focusing heavily on anything and everything an on-screen character was touching, when they were sweating, etc.

I love this movie, Soderbergh is such an incredible filmmaker.

It’s a tough watch for sure and a tougher film to find value in. You’re thrust into this sexploitation movie that seems murderously cruel and void of meaning. Somehow by the end of it though, it just felt like a much deserved, intimate view of a real crime.

It’s actually based on an American case, about a man Richard Speck who broke into a hospital in 1966, raped and murdered eight nurses. The cinematography is startling cold. The dialogue is profound and helpless. This has to be up there with the most cynically sexualized piece of exploitation cinema.

I struggle to explain why it seems important but to me; it exists in this place of sadism that offers no reprieve. It’s the darkest side of horror film and I have to recognize it as being one of the better examples of that. 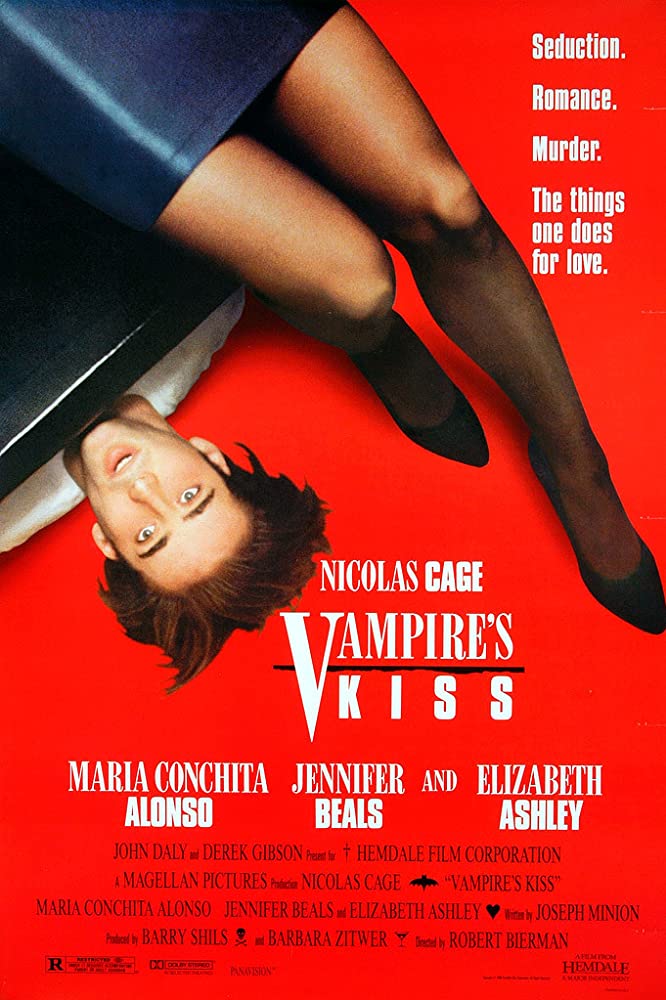 This movie is fucking insane dude and quite possibly launched Cage’s entire modern acting career. His accent alone through most of it is more Derek Zoolander than any ethnic or geographical background. He turns it off and on during certain scenes, intentionally as an aspect to the character but it’s still distracting and ultimately, something that didn’t work for me.

With that harsh, but relevant criticism being said, his insanity throughout this movie is so goddamn impressive. I hate his early performance but love his late performance. Really, this role for him is so indicative of his entire career, even up until now. It’s a huge reason why I love him as an actor. He gives every role his all and oftentimes that overacting leads to some incredible moment. There’s plenty of those incredible moments throughout this film. If you need an example of his commitment, there’s a scene in this movie where he eats an actual fucking cockroach.

I love American Psycho and watching this, I can see where a ton of the performance inspiration in that film came from. Cage’s body language here is so insanely expressive and probably my favorite part of the entire project.

Even if you’ve seen this one before, I highly suggest a rewatch, there’s something special about it.

I’m starting to think, on a second watch, this is Hollywood perfecting the sci-fi original. It is so incredibly stupid if you use your brain but it’s also pretty goddamn entertaining. It’s actually remarkable that I’m able to appreciate this movie because I wouldn’t have without the dozens and dozens of absurd, poorly produced predecessors.

I loved Statham’s character and even Wilson’s character was just so funny. Really, speaking from the heart, the star power and money involved in this movie is the funniest thing about it. I don’t think this was ever meant to be taken seriously like a Jaws movie; it’s pure satire.

I should mention that the movie did have a few genuine moments of drama or suspense and I’m choosing to believe those were pepper and salt on this shitsteak. The idea of a studio producing this movie with everything involved is too unfathomable for me to believe they ever thought they were making some blockbuster.

It could have ended a half hour early and I would have been fine with it, sort of a meh response. But, in typical ridiculous monster movie fashion, it continues with this absolutely insane finale that is actually sort of, if you squint and drink heavily, kind of…impressive?

I don’t know man, I’m kind of half-laughing as I write this but I liked it. It is what it is but I would recommend it. It’s just a fun movie.

This Wes Craven directed TV-movie is campy as hell, a bit sloppy with subpar effects but also, pretty goddamn entertaining.

I really dug the ending, it kind of reached beyond the films budget but most of it worked and ended up being pretty trippy.

I liked it; nothing amazing but definitely worth a watch.

It ends and if you don’t outright hate it, it’s hard to explain why you like it because it’s such a rough watch. I fall in the latter category. I did think it was just too much at one point; too many metaphors, too little exposition then quickly, too much exposition.

However, with that being said, the film still resonated with me. It felt powerful in a way only a filmmaker with huge ideas could fulfill. I hope Claire Denis continues to remain faithful to her vision, especially when receiving larger budgets like this.

Listen, I’m not a fucking nerd who is all-knowing about these comics and how well they translate to film but let me tell you, this movie fucking rocks. Ron Perlman kills this role and has so much personality. This is the first Hellboy movie I’ve seen but I felt like I’ve known this character for decades.

It’s CGI-heavy and super Hollywood-buckbuster-y but, it’s just fucking awesome. Selma Blair plays a key role but is ultimately soft-spoken. However, Jeffrey Tambor is the best supporting actor. He plays this impossibly likable cunt and is genuinely funny at times.

I’m not sure what else to say. I watched it, I liked it. It’s a good fucking time man.

This is another Italian horror film released during the whole dubbing fiasco, which if you’re not familiar with it, it’s going to be distracting. Frankly, I’ve seen like 100 of these films and it’s still a little distracting.

The next thing I have to mention is this movies hilarious use of hair metal music. It’s something I found funny in Phenomena and it’s possibly even more poorly used here. Picture tense, dark, horror scenes but with a wailing guitar in the background. Yeah…it’s, well…it’s something.

There is something good to say about this movie and that’s the goddamn awesome practical effects. There’s multiple scenes that pop into my head but one in particular is legendary. And look at fucking that, just looked up the special effects artist, name is Antonio Corridori. He’s the special effects artists for none other then, Phenomena. We’ve come full circle boys. Also the special make-up effects artist, Rosario Prestopino. Alright she probably deserves more praise looking at her catalogue of Bava and Argento films. Now that I’m kind of thinking about it, I’m seeing Antonio maybe being responsible less for the body horror and more for the shitty CGI lightening. Who fucking knows, props to them both.

As clunky as this film is in execution, the story is actually pretty ambitious. This is a much lesser known Italian horror film, sitting at less than 400 reviews in iMDB but it’s totally worth a watch. It’s not a good movie my any means but it’s a fun watch.

It didn’t dawn on me what to think of this film once it ended. Just kidding, it was horrible.

Acting wise, it dips in-between bad and like, student film quality. It’s shot…alright. I mean, there’s nothing particularly interesting about the cinematography but I’ve seen worse.

It’s a skip for me. I mean, I watched it so I can’t get that time back but you know what I mean. 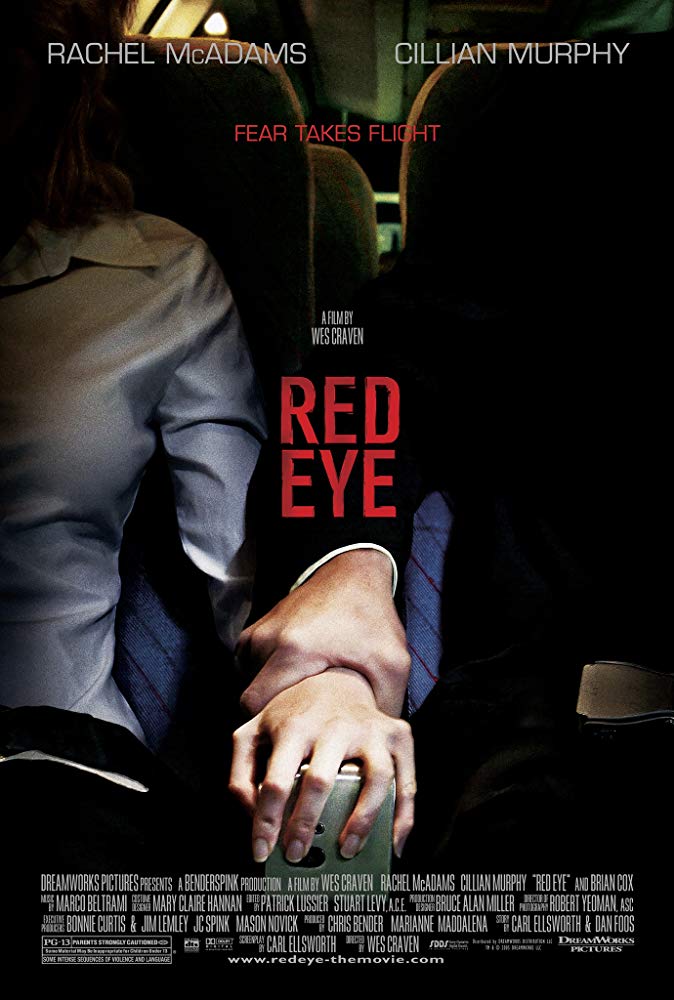 I saw this movie when it came out but felt the need to rewatch it and I never knew Wes himself directed it. I have to say, it’s pretty goddamn enjoyable.

The setup is sinister enough, being in the confines of a plane, to warrant it being discussed as a horror but it does devolve into an action thriller, not that I’m a genre-snob.

Both Cillian Murphy and Rachel McAdams are fantastic and it’s a tight knit package. I think it’s original and well-executed.

This is probably one of my most bland reviews ever, I apologize. I literally can’t think of anything else to say about it.

I'll be doing my absolute best to review a different horror movie every day and provide honest, easy-to-digest reviews. Tweets by GreasyMcTitties